When I do commissions for other developers related to RPG MAKER MV, It was not uncommon finding inside their projects plugins from the most famous plugin's makers. Specifically, there is the combination between SRD_SuperToolsEngine and SRD_HudMaker that in most of the situation was a must.

So, I've developed this small utility plugin that should help to solve this problem. It actually helps to upgrade the performances of the HUD MAKERin general, but if you want you can just use it as a companion during the devleoping process for making easier to access developer tools without having langs.

WARNING! Inside this page you will not find the original HUD MAKER plugin by SRDude that is owned by him with all the rights related. More info inside Plugin's Compatibility below.

Update Invisibile Children -> As default the HUD MAKER updates invisibile children. If you set the plugin parameter to FALSE children not visibile (or that has alpha/opacity set to 0) they will not update.

Jump Frame? -> When this parameter is set to TRUE the update method of the children will be processed only when Graphics.frameCount modulo 2 is equal to 0, meaning that it will jump odd frames. This can increase a lot the performance of your game, but if you children needs to update every frame this could create unwanted effect. However, this could be really useful in a testing environment.

Now, let's showcase the actual effect. I've made two GIFs showing the differences when the Development Console is open without and with the plugin.

This plugins is a small addon for SRD_HudMaker.js, it needs the original plugin for working. This plugin works inside Rpg Maker MV versions >= 1.6.x

The plugin is developed on Rpg Maker MV - Version 1.6.1 and with the related PIXI.js Version 4.5.4. It should be compatible with older version of Rpg Maker MV.

Thank you very much for the support! 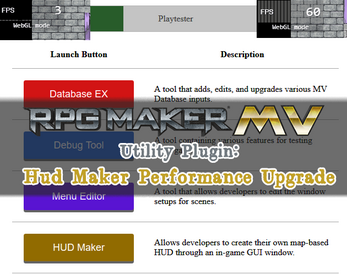