Render the 3D Model of your items, exploiting the power of Babylon JS.

3D Object Examination  is an amazing plugin powered by Babylon JS 3D Engine that allows to render a specific game scene for rendering 3D Models, rotate around them and assigning events on specific camera directions and angles.

The use of this plugin is recommended for expert users. Due the particular nature of the code, I can't assure the compatibility or other eventual plugins made with Babylon that can add or other features.

This plugin needs for working the addition of two libraries:

You can download the package (with the plugin) containing the libraries' version used for the development directly on this itch.io page (Suggested) or you can find them following this links: (FOLLOW THE LINK; RIGHT-CLICK AND "SAVE PAGE AS...")

Moreover, you must create a folder named models/ in your project folder. Inside this directory,  all the models that you want to use should be placed inside.

The models inside the showcase video were used for education purposes. For more information, you can find the authors pages down there:

This plugin is provided by a series of plugin parameters that allows to set some general options:

This plugin renders a 3D Scene on a different canvas than the one where PIXI.JS Engine works for Rpg Maker MV things.

For render a  3D scene - and loading a model - you have to use this script call:

The options argument is an OBJECT where you can set different kind of options.

In the image above are shown the main options that can be used for rendering a scene and their DEFAULT VALUES. Specifically:

The Arc Rotate Camera is both affected by its position in the space and the angles of rotation around the model target. Moving around with inputs or setting the options above will affect eventually both positions and angles on the same time.

BINDING AN EVENT ON THE 3D OBJECT:

Using this plugin you can bind Events that when on the correct position allows to trigger a switch which can be bound to a PARALLEL common event for creating text events and such.

You can bound events after the creation of a scene. Be sure to do it in the same script or to use a method that expand the script call box - or you can create a custom function in a plugin file -. In a few words, be sure that the execution is after the creation of the 3D Scene. On the dispose of the scene, all the events will be removed.

For binding an event there is a specific script call:

The EVENT object is composed by:

If you have knowledge on JS, I highly suggest to take a look inside the plugin and in general to Babylon JS documentation for discovering some other amazing features.

However, I have coded inside the plugin an advanced script call for moving the camera smoothly to a new position and/or angle.

This script call is:

Inside the showcase video, you have probably noticed that when the event is triggered the 3D models goes to a new position. This is due the script called using the code above. Below, some screenshots that shows the use of the script call and how to create a new position using the Vector3 class (alias for BABYLON.Vector3).

When one of the two position's arguments (new position or angular position) is not used, NULL needs to be inserted.

Others advanced script calls that can be of use:

It generates a Vector3 of the current ALPHA(X) - BETA(Y) - RADIUS(Z) angular position of the camera.

Returns the camera object of the scene.

Get the current Vector3 position X - Y - Z of the camera.

This properties allows to set a MIN AND MAX ALPHA AND BETA ANGLE ROTATION. This is really similar to the zoom limit that actually impose a constraint to the RADIUS.

Imposing angle constraints is really useful when you want to take control of the camera rotation limit around the model, in particular when you have events created using angle position.

On the code above I have set the constraint to the ALPHA angle on a range of (MIN:3, MAX:5).

The plugins looks difficult to use, but It only needs some practice and doing some experiment. Below, the screenshots of the events created for the video showcase: 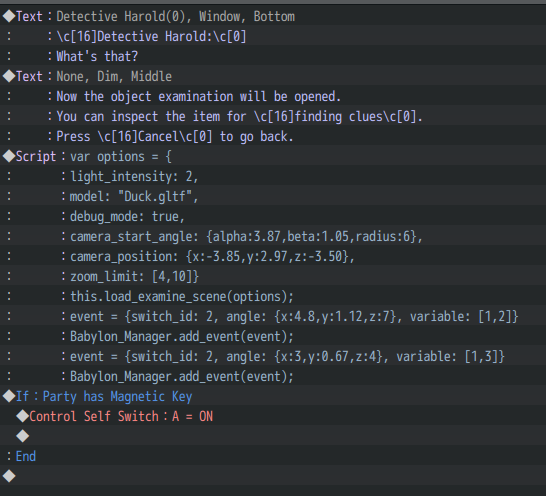 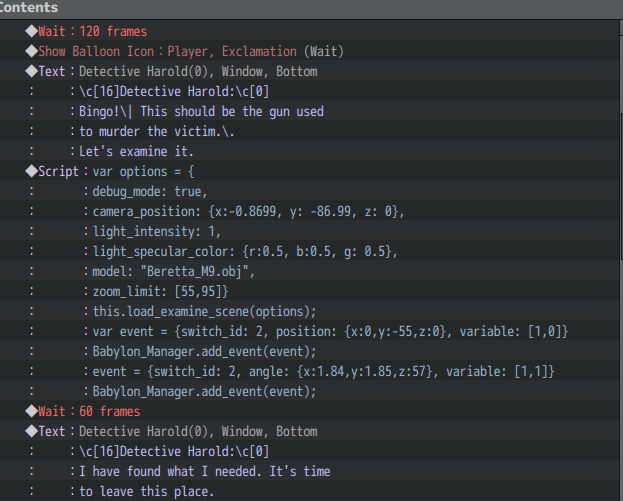 For making good use of the 3D scene when the model is rendered, the creation of a well organized common event that will handle the bound events is really important.

Below the screenshots of the common event I have created: 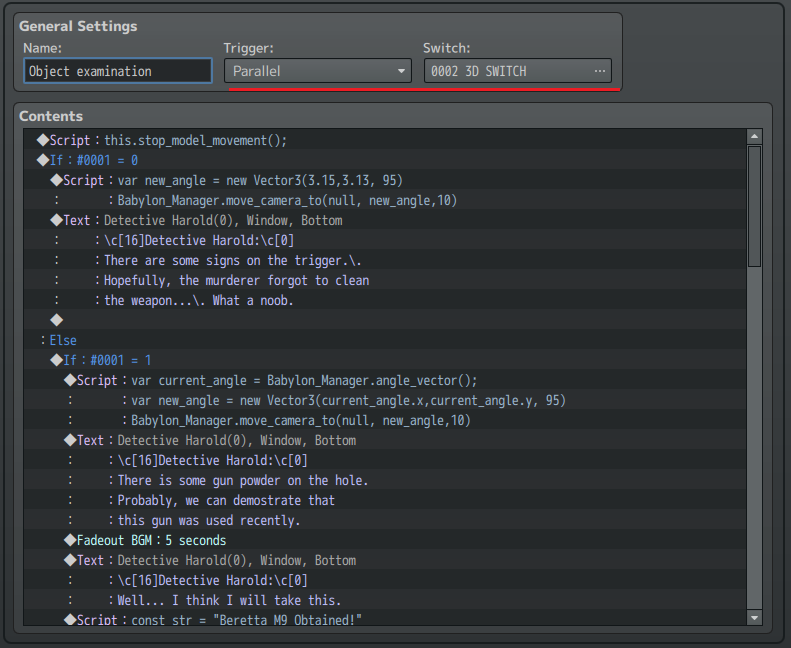 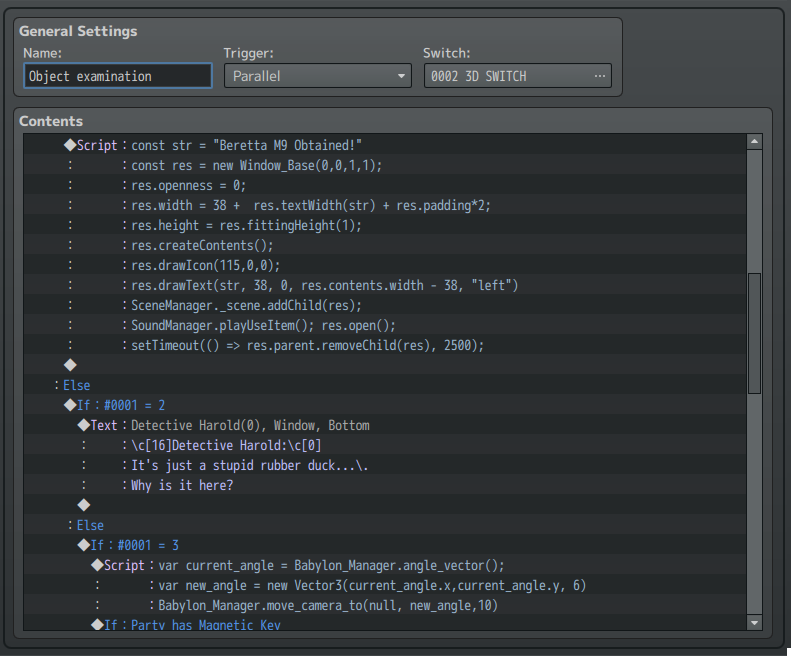 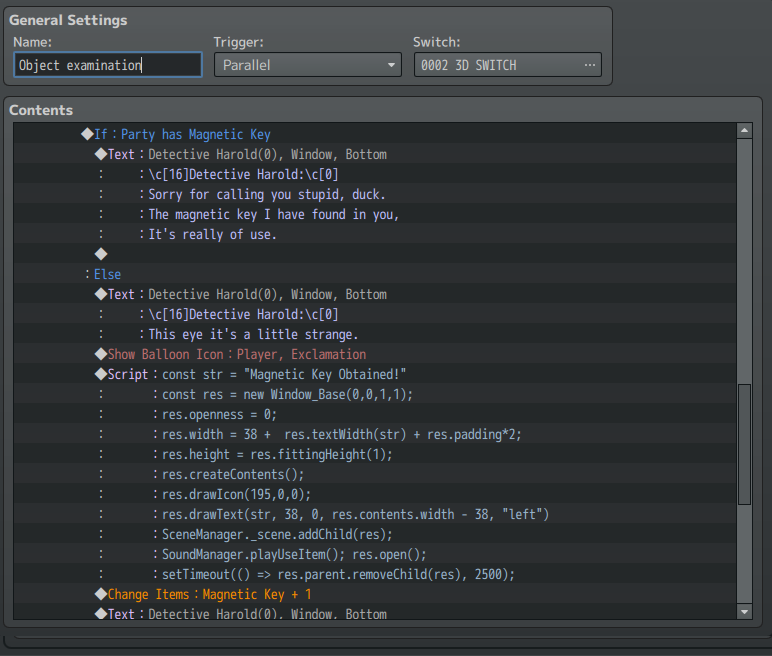 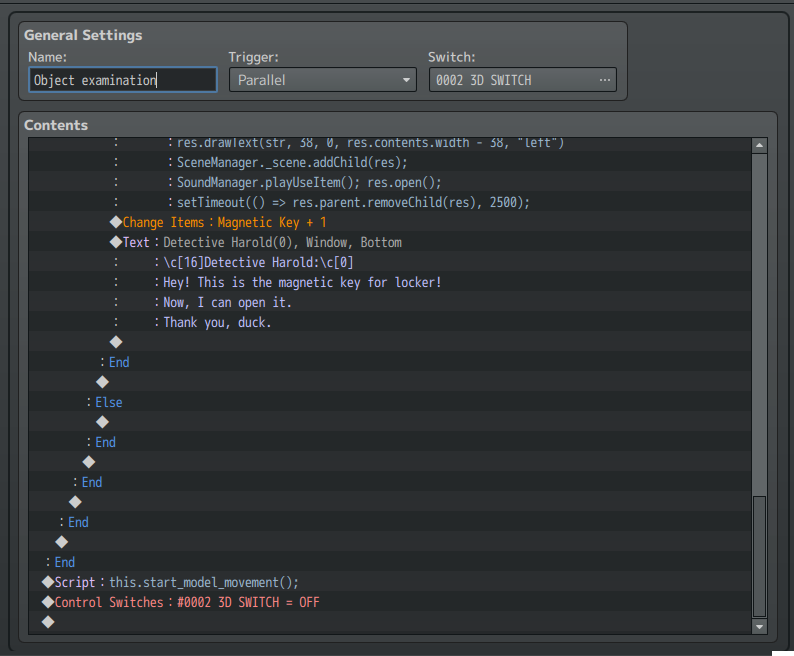 There are some good practices to respect for making a good common event:

1. Set the trigger to PARALLEL and the SWITCH you have set in the event bound in the 3D Scene. Potentially, You can handle the events of different 3d scene in one common events if you make a good use of the variable assign parameter of the event binding system of the 3D Scene.

2. When the event is triggered, It's good pratice to disable the camera inputs for avoiding to create problems in the flow of the event. This is useful to introduce other script calls that are made for this task:

As you can see they're placed on the start and on the end of the common event for disabling and enabling the inputs of the 3D scene.

3. Set the switch activated from the scene event to FALSE. This way you can avoid to have the event always activated.

The debug mode of the 3D scene is really important during the development process to actually see the positions and the angles of the camera and how they impact the 3D Model view.

Each model gives a different response to the camera, however if you have knowledge on 3D modelling and rendering, exporting yourself your models, you can have a better control of this point.

The debug mode looks this way when activated: 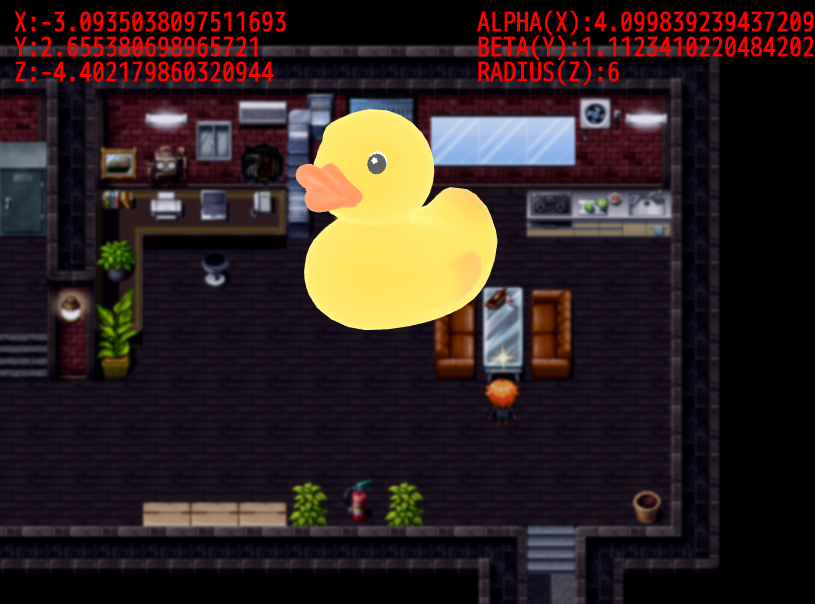 The angular position ALPHA - BETA - RADIUS is referenced always as X, Y and Z in the creation of the scene events - as explained above -.

The Babylon JS library is still an experimental technology. Some 3D models may not render correctly as other engines or the software where they are originally created. This advice is made specifically for people that has not any knowledge on 3D modelling and aims to download the model from the web. I highly suggest for the best result to use .gltf models that has a good accuracy rendering with Babylon.js.

This plugin should not affect directly any plugin. However, I'm not responsible for plugin errors that are not directly related from my plugin itself.

The plugin is developed on Rpg Maker MV - Version 1.6.1 and with the related PIXI.js Version 4.5.4. This plugin is NOT compatible with older Rpg Maker Version that 1.6.x.

Thank you very much for the support!

In order to download this Rpg Maker MV - Plugin you must purchase it at or above the minimum price of $12.99 USD. You will get access to the following files:

Hello, does it support android？

Hello! Thank you for interest.

Babylon JS 3D engine potentially works on Android, too. However, this plugin is developed mainly for a Desktop use. So, I'm not really sure about the behavior on mobile's platform.

Reminds me of resident evil... or alone in the dark? Don't know for sure, but nice one indeed! ^^

Yeah, Resident Evil and many other games where you find object and examine that. Glad that you like it! 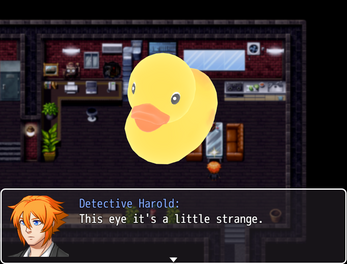 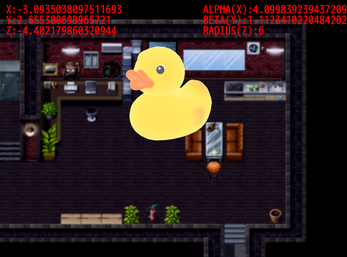 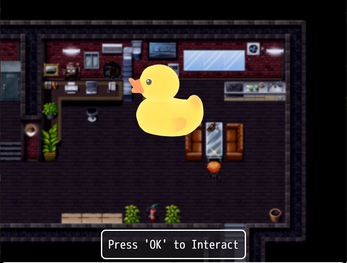 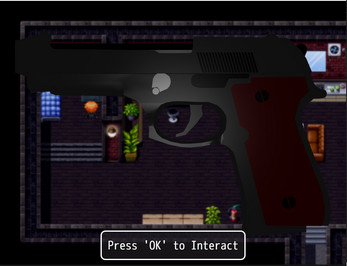 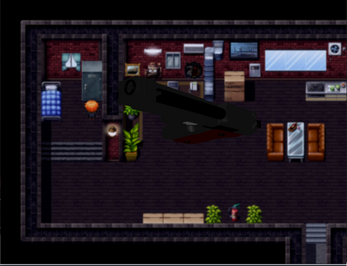